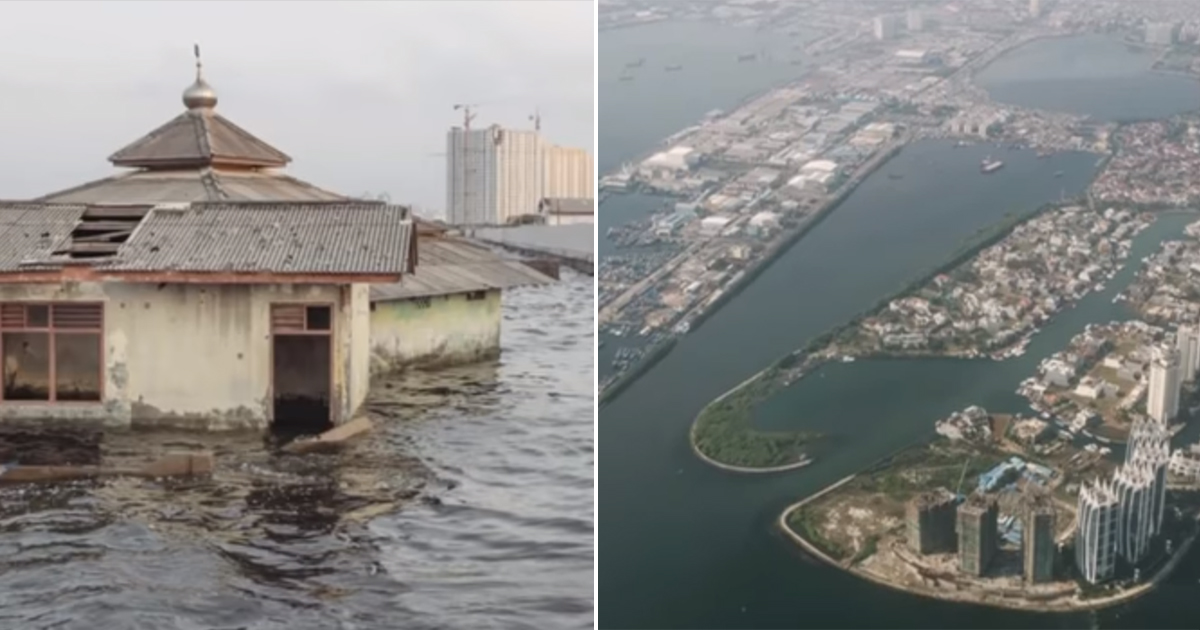 This is the Waladuna Mosque located in Jakarta the capital city of Indonesia which is almost submerged in seawater. The last time people used it to pray was in 2001 when it was not yet submerged in water. This is a sign that the entire capital city could sink over time if it is not resolved as soon as possible.

Jakarta is slowly sinking. If you look at the overall land area, Jakarta was about half-fl0oded from 1987 to 2007. The water level increases by around 25 cm every year. As a result, the region became unsafe. Many homes were also d3stroyed, and residents were forced to relocate. As a result, most residents are concerned about where they will live if the water level continues to rise.

The majority of the people that live here are fishermen. However, they are not the only ones affected by Jakarta’s slow sinking, as over 10 million citizens remain at risk. 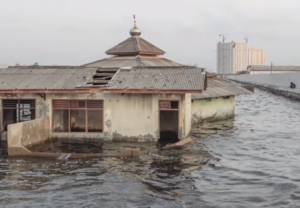 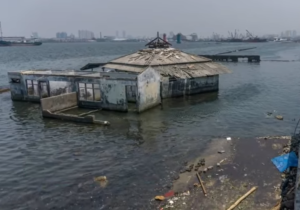 Experts predict that a substantial portion of Jakarta would be entirely flo0ded by 2050.

But what exactly is the cause of Jakarta’s gradual sinking?

There are three causes for this. The first is the extraction of groundwater. Because most Jakarta residents cannot afford piped water, they are forced to dig soil and construct wells to get water stored in so-called aquifers.

Subsidence is caused by the well being overcrowded. Over half of Jakarta’s population relies on wells. Naturally, aquifers are refilled when it rains. However, it has not been simple in Jakarta since the soil has been covered with concrete throughout the decades owing to the city’s rapid development. Rain that would normally refill the aquifer is no longer absorbed as a result of this.

Poor planning is the second reason Jakarta is slowly sinking. The land sinking has been worsened by economic growth. Aside from extracting groundwater, it has increased the area’s population growth. The population of Indonesia’s coastal regions reached 47.2 million in 2010. This is one of the highest figures in the world. Since 1990, Indonesia has raised about 35% of the population unprepared and unplanned. 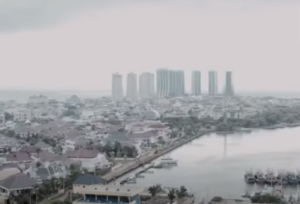 When these issues are combined, the result will undoubtedly be dis4strous. Residents have taken their ways thus far. Others do such things just to cross over to their neighbors’ area. Every time it rains, the water level in the area rises, making it more dang3rous, just as it was in 2007 when Jakarta faced one of the worst flo0ods in the region.

The st0rm and high tide that hit the area caused rivers and canals across the city to flood. Around 80 individuals were killed at the time. Many of the people were sleeping on the boat itself. As a result, while many people use the nearby well, the entire city continues to sink. Given this issue, the Indonesian government discussed transferring the capital city from Jakarta to Borneo Island in 2019. But everyone knows such a strategy would not benefit Jakarta’s millions of residents.

In 2014, the Jakarta government established a program to avoid and address fl0ods. It will construct 120-kilometer-long sea walls with the assistance of an architecture company to prevent seawater from sinking Jakarta’s land. However, just 10 kilometers have been developed thus far. It’s too far away from the 120-kilometer target.

The problem with Jakarta’s sea wall development is likewise slowly sinking. This plan requires large funds. The seawall’s first 38 kilometers are already worth $40 billion. The construction of this 12-kilometer coastal wall will take 30 years. The difficulty is that, according to experts, practically the whole land of Jakarta was already underwater before that time.

Despite the intense effort of the Indonesian government, the fast rise of water and ground subsidence in Jakarta remains unresolved. According to experts, the sinking of Jakarta can only be prevented if the pumping of groundwater is stopped. In other words, the government must give an alternative to using the well. 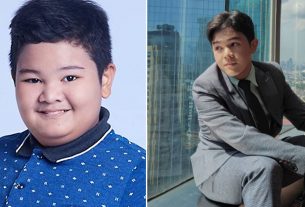 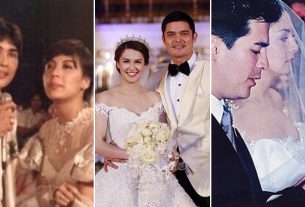